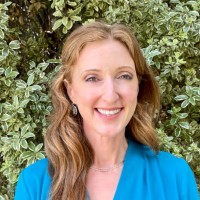 Deanne is a state-licensed and ASHA-certified bilingual speech-language pathologist. She received her bachelor’s degree in French Language and Literature from Wittenberg University in Springfield, OH, and she holds a diploma in French Studies from the University of Nice Sophia Antipolis in Nice, France. Deanne received her master’s degree in Speech-Language Pathology from The George Washington University in Washington, DC, and she has been practicing since 2007.

After her clinical fellowship, Deanne spent nearly a year and a half working in Santiago, Chile, where she treated both pediatric and adult clients. Since returning to the United States, Deanne has worked with culturally and linguistically diverse pediatric populations in early intervention, clinical, and school-based settings. She has also been a member of transdisciplinary bilingual assessment teams and autism diagnostic teams.

Deanne is certified to lead The Hanen Centre’s “It Takes Two to Talk” program for parents of children with language delays and “More than Words” program for parents of children with autism or social communication difficulties. She is also an SOS Approach to Feeding provider. Deanne is a fluent Spanish speaker, a conversational French speaker, and a passionate advocate for culturally and linguistically responsive services and heritage language supports and programs.